Many Christians would say –“Duh – ya! Of course it is wrong for a Christian to pose nude, or take nude photos, or paint nudes or to have any involvement in nudity at all”.

The reasons for this common belief among Christians are:

I would not argue with the fact that if a person poses nude, they might cause others to be sexually aroused by their beauty. While this could apply to women as well, it would primarily apply to men because men are usually much more visual than women.

Our sexuality, our sexual nature, is a part of who we are as human beings, this true for men and women. As men, we are much more sexual in our natures, due to having 10 more times the testosterone in our bodies. Our brains are bathed in testosterone while we are in the womb, and this makes us have highly competitive, aggressive and yes sexual brains.

As believers, God wants us to channel our sexuality in positive ways that do not break God’s law. While all acts of physical sex are reserved for marriage between a man and woman, this does not mean we have to suppress our sexuality until we are married. It also does not mean that after marriage all of our sexual energy, and every sexual thought must be about our spouse.

What it means is we are not to fantasize about trying to get someone to sleep with us outside of marriage, whether we are single or married, that is the very definition of lust. Lust is fantasy to possess something that does not belong to us.

Lust is NOT being sexually aroused by the sight of a beautiful woman.

Lust is NOT being wondering what a woman looks like with her clothes off.

Lust is NOT having a sexual dream or fantasy about a woman you are not married to.

The “no arousal” argument

There may be some Christians (and non-Christians) that think it is OK to paint or photograph nude models as long as there is no arousal. Every time I hear this theory, it makes me want to chuckle. I don’t dispute that in 95% of cases, especially for men, the site of a nude model that is even semi attractive would cause sexual arousal.

Now can men learn to hide their arousal? Certainly. But we as men are hardwired for visual beauty, it’s a fact. To say otherwise is a biological lie. But again as I said above, there is no sin or immorality with being aroused at the site of a beautiful woman. It is what we do with that sexual arousal that will become sinful, or not sinful behavior.

Let me review some principles from my article “Is Nudity always shameful”:

So once we understand that lust is not sexual arousal, or even sexual fantasy, but is instead thoughts and fantasies about actually possessing someone that we cannot have, or having someone outside of marriage, then we need to look at principles for nudity.

God wants us as believers to be clothed, generally speaking – see my post Why God meant people to be clothed.

However, when someone disrobes voluntarily, for a specific time, and for a specific duration for the purposes of being painted or photographed – no sin has occurred.

“How beautiful are your feet in sandals, O prince’s daughter!

The curves of your hips are like jewels, the work of the hands of an artist.

2 “Your navel is like a round goblet which never lacks mixed wine; your belly is like a heap of wheat Fenced about with lilies.

3 “Your two breasts are like two fawns, Twins of a gazelle.

4 “Your neck is like a tower of ivory, your eyes like the pools in Heshbon by the gate of Bath-rabbim; your nose is like the tower of Lebanon, Which faces toward Damascus.

5 “Your head crowns you like Carmel, and the flowing locks of your head are like purple threads; The king is captivated by your tresses.

6 “How beautiful and how delightful you are, my love, with all your charms!

8 “I said, ‘I will climb the palm tree, I will take hold of its fruit stalks.’ Oh, may your breasts be like clusters of the vine, And the fragrance of your breath like apples,

9 And your mouth like the best wine!” “It goes down smoothly for my beloved, flowing gently through the lips of those who fall asleep.

I completely disagree with those who are Christian, or even non-Christian (such as Muslims) who believe that nudity must be covered at ALL times (except for between a man and woman in the privacy of their own home).

Both from a Biblical perspective, as well as practical perspective, how does it make sense that God has made the human body so beautiful, especially that of women (“the work of an artist”), only for it to be hidden away?

I have used this example before, and I think it very applicable to this issue beauty as well as nudity. 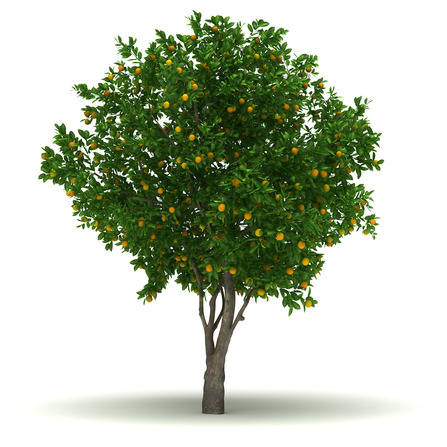 Imagine that a man plants a beautiful orange tree in his yard. It grows and blossoms with beautiful fruit. But people walk by and look at its beauty, and this bothers him, because he reasons “that tree belongs to me, and its beauty is only for me”. So he hires a construction company to build a 20 foot wall around it with a door so only he can enter and see its beauty.

Now most of us would find this utterly ridiculous, but this is how some men see their wives, and some wives think they should be treated as wife. They see a woman’s beauty as something to be hidden, and only enjoyed by the husband in private.

Using this same tree, continuing our analogy, what if the man did not build the wall but allowed the beauty of his tree to be enjoyed by all his neighbors, and all who would drive by his home?

If the tree represents his wife, there would be no sin people walking by and enjoying the beauty of his “tree”, then the only sin would be if someone were to come and touch that “tree”, and take from its fruit – for that tree belongs him and him alone.

See these other related posts in this series on Biblical Nudity:

Why did nudity become shameful after the fall?

Why God meant for people to be clothed

Why nudity is not always shameful for a Christian 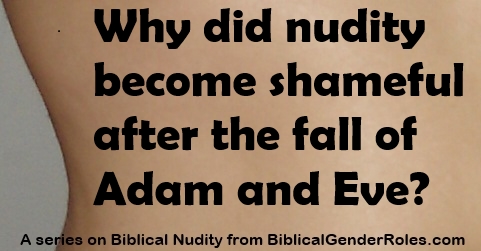 There was no shame about nakedness before the fall

The Bible says this about Adam and Eve right after they were created by God:

Shame felt for the first time

In Genesis 2 – God had told Adam not to eat from the Tree of the knowledge of Good and Evil. Then we read in Genesis 3 that sometime after God created Eve for Adam, and brought them together in the first marriage, Eve was deceived by the Devil. He promised her this “knowledge” that God was hiding from her and told her that she and Adam could become gods by eating the fruit.

Eve ate the fruit, convinced her husband to eat it and the Bible says:

“And the eyes of them both were opened, and they knew that they were naked; and they sewed fig leaves together, and made themselves aprons And they heard the voice of the Lord God walking in the garden in the cool of the day: and Adam and his wife hid themselves from the presence of the Lord God amongst the trees of the garden… And the Lord God called unto Adam, and said unto him, Where art thou? And he said, I heard thy voice in the garden, and I was afraid, because I was naked; and I hid myself. And he said, Who told thee that thou wast naked? Hast thou eaten of the tree, whereof I commanded thee that thou shouldest not eat?” – Genesis 3:8-11

The reason for Adam and Eve’s shame

What is often overlooked is the fact that the tree was not just a tree of the knowledge of “evil”, but also of “good” (Genesis 2:17 & 3:22). Most people only think of the tree giving Adam and Eve knowledge of sin and evil, but the fact is, it also gave them a more complete knowledge of what is good.

When we see little one and two year olds running around the house naked and unashamed, we call them “innocent”. But we know Biblically that children are born sinners, and they sin just as adults do, just in different ways. Little children lie, steal and hurt one another. What we really mean when we call that naked two year old running around “innocent” is, that they are “ignorant” of the fact that as human beings we are not meant to be naked at all times, but we are meant to be clothed.

If nakedness were truly a symbol of innocence, then when we get to heaven and when we dwell with God for eternity, we would again be naked. But look at what God says in the book of Revelation regarding clothing:

“After this I beheld, and, lo, a great multitude, which no man could number, of all nations, and kindreds, and people, and tongues, stood before the throne, and before the Lamb, clothed with white robes, and palms in their hands;” – Revelation 7:9(KJV)

In the eternal state, we will be clothed in white, not naked. We will once again be completely innocent from sin, yet we will not be naked.

Who told you that?

What was God’s first response to Adam and Eve’s knowledge of their nakedness?

Let me give an example to illustrate from a parents point of view. Imagine you have a 6 or 7 year old child, and they find out at school from some kid in their class about sex. Any parent would reasonably ask “Who told you about that? It’s not that the knowledge of sex is bad thing, it is simply that it was not yet time for the child to have this knowledge. This is exactly what happened in Eden.

Make no mistake, God was angry at the way Adam and Eve gained the knowledge of their nakedness through sin, and not in the way he intended for them to find out, from him and in his perfect time.

He clothed them, because they were always meant to be clothed.

This has been the first article in our series on “Biblical Nudity”. In this first post we talked about the shamefulness of nudity, in other posts in this series we will cover topics such as “Why God meant for people to be clothed”, “Why nudity is not always shameful”, “Can Christians pose for and paint nudes?” and other related topics to Biblical nudity.