I am conservative Christian and despite many differences I have with Donald Trump I have supported him for President since the beginning of his candidacy last year. Donald Trump is neither a conservative candidate nor a liberal candidate but rather he is a populist and protectionist candidate.

First I want to dispel the notion that protectionism is incompatible with free market capitalism and conservatism.

Protectionism is NOT incompatible with free market capitalism and conservatism

The truth is that since the time of Lincoln the Republican Party has been a protectionist party. In fact even before that most Presidents of either party going back to our first Presidents were protectionists. Even though “tariff” is swear word today in modern politics until the 16th Amendment was adopted in 1913 the majority of the federal government’s income came from tariffs on goods from other nations.

The Democrats lead by FDR in 1932 successfully convinced Americans that tariffs had led to the great depression.  See a larger discussion debunking this myth at http://www.americanthinker.com/articles/2010/04/protectionism_didnt_cause_the.html

While free traders like to laud Reagan as free trader purist this is not historically accurate.

“President Reagan often broke with free-trade dogma. He arranged for voluntary restraint agreements to limit imports of automobiles and steel (an industry whose interests, by the way, I have represented). He provided temporary import relief for Harley-Davidson. He limited imports of sugar and textiles. His administration pushed for the “Plaza accord” of 1985, an agreement that made Japanese imports more expensive by raising the value of the yen.”

I am glad that Donald Trump is successfully being able to make the case to Americans that we need to bring back the historic protectionism that our nation used to embrace.  Donald Trump is actually the first President since Ronald Reagan to be winning over many blue collar Democrats who are tired of watching their jobs being sent overseas.

Donald Trump’s Nationalism is good for our nation

Nationalism is the idea of rally a people around common historic and cultural values. We need Presidents that will put the American people and the American culture first.  This is why Donald Trump’s immigration message is ringing so true with millions of Americans. We should be able to tightly control the immigrants coming into this nation whether they be from Mexico or Middle Eastern countries and no it is not racist to want to protect cultural balance of your country.

Donald Trump is the natural successor to Pat Buchannan

Most people may not remember but many things on Donald Trump’s platform especially regarding his protectionist and immigration policies mirror that of another Presidential Candidate back in 2000 – Pat Buchannan.  But the reason Donald Trump is succeeding where Pat Buchannan failed is because our nation has actually seen what Pat Buchannan prophesied would come true.  American has seen its manufacturing industry decimated over the last 16 years under Bush’s and Obama’s free trade policies.  Also our culture is rapidly changing because of the lax immigration policies of 16 years of Bush and Obama.

The other reason Trump is succeeding where Buchannan failed is because he has two things Buchannan did not.  He has a powerful persona like Reagan did (albeit very different from Reagan) and he has been extremely successful in the business world where Buchannan was more of a politician.

Why am I voting for Trump even though he is not a strong Christian?

Probably the biggest difference between Trump and Buchannan is the difference in their faiths.  Buchannan is a man of deep faith where Trump is not.  For some Christians this might be an issue but for me it is not.

I am not voting for the Pastor of my Church but rather I am voting for the President of my nation. Often time’s men who make great Pastors would not make great Presidents and vice versa. I do not kid myself that Donald Trump is even a true Christian.  He might believe in God but that is about it. But I am not voting for him based on his faith but rather on his policies and my faith in his ability to protect the economy, security and culture of this nation.

I am also trusting in the fact that while he may not be a strong Christian – he has pledged to protect the freedoms of Christians to worship and conduct their businesses according to their faith.  That is good enough for me.

I encourage my fellow Christians, conservatives and Republicans to join me in voting for Donald Trump tomorrow on Super Tuesday.

I was watching the first part of the second Republican debate tonight and Lindsey Graham said something like this in response to questions about American concerns about illegal immigrants taking American jobs, driving down wages and affecting the culture at large:

There is an ugly truth behind what he was saying that he would never say nor will any other politician have the courage to say.

We as a nation are not having enough children.

The reason we are not having enough children is not because of a bad economy.  American has had many economic down turns and still had a much higher fertility rate than we have now. We have had a declining fertility rate for decades.

The reason we are having less children is because of two things – feminism and materialism. We look at children as burden from a financial standpoint and as holding women back from their careers pursuits.

We need to bring back a culture that looks at families(big families) as an honor, not something to be mocked. Our tax system should encourage marriage and larger families(at least 4 children per family, as opposed to the average of 2 that we have now.) We need to encourage stay at home motherhood with massive tax incentives for married stay at home moms and tax penalties on woman who are married with children and work.

If we do this we will no longer need to import other countries children to keep our system from failing, but we will stand on our own and keep our culture in the process. 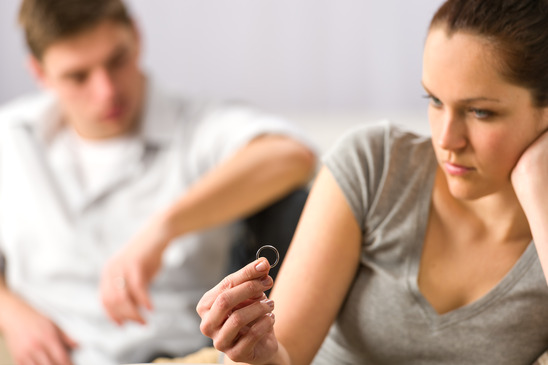 The Census Bureau apparently thinks that tracking marriage and divorce rates in the United States is “low benefit and low cost category.” This is not the first time in recent years the Federal Government has cut research into marriage and family issues in the United States. Back in 1996, funding for detail marriage statistics that was given to the states for almost a century was cut.

I am all for cutting government waste.  Yes there have been stupid programs that studied things like “Why a Frisbee flies” and millions of other dollars wasted on such research.  But can anyone say with a straight face that the government monitoring what our marriage and divorce rates are is wasteful spending?

I would submit that most of the people who would say “yes it is wasteful”, are either those who are serial divorcees or those who have never been married because they see this institution of marriage as “outdated” and “unnecessary” for the health of society.  A few others who would oppose it would be privacy advocates, saying “its none of the government’s business”.

The underlying truth is, there is a certain group of people, some in very powerful and influential places of government and society, that want to take the spot light off marriage, cohabitation and divorce. These people come from all political persuasions, Democrat, Republican, Libertarian…etc).  They simply want to move the whole “marriage equation” from the political spectrum, because it creates problems for them when they are running for office.

For instance, Republican law makers have secretly said they wished the Supreme Court would just end the gay marriage debate by declaring it a constitutional right. This thinking is kind of ironic since most Republicans say they don’t like Courts “legislating from the bench”, which is what they would in essence be doing by granting this new right of gay marriage out of thin air.

I agree with what the President of The National Council on Family Relations recently said about this disturbing move by our Federal Government:

“The fact that a statistic as basic as the divorce rate is in question should be a source of concern to family scholars, educators, and practitioners. Given the importance of this topic, you might think that the federal government is committed to maintaining—and even enhancing—the quality of marriage and divorce data. But in a startling development last year, the U.S. Census Bureau (under pressure from Congress to cut costs) announced its intention to drop the marital transition questions from the ACS. The ACS is currently the best source of national and state data on the frequency of marriage, divorce, widowhood, and remarriage. And the ACS is the only data source that can measure marital trends in relatively small groups in the population, such as Asian Americans, Hispanic subgroups (e.g., Cubans and Puerto Ricans), and people in same-sex marriages. Losing this resource will have serious consequences for the quality of family research.”

I consider myself a conservative, and I generally support conservative candidates for public office. I also support the downsizing of our Federal Government.  But this is one area where I completely disagree with some fellow conservatives in Washington looking to make cuts.  The family unit is the building block of society, it affects every aspect of our culture and the government should maintain the best statistics we can in this crucial area.  We should not be cutting this funding, but rather expanding it and restoring the cuts made to in 1996.

I encourage everyone(liberal, conservative or otherwise), the believes that marriage and family is bedrock of society, and the government should be tracking this information, to write their congressmen today to pressure them not allow this to be cut. Also write to the Census Bureau as well.