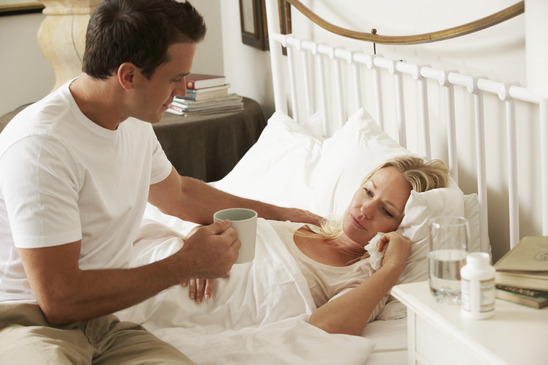 God tells us as Christian husbands that we are to love our wives as Christ loved the Church and gave himself up for her. This is both a beautiful picture and at the same an intimidating proposition for any Christian husband. God tells us that our relationship with our wife is much more than just any human relationship. Marriage is a symbol, of the relationship between God and his people, and as such, we as men have the awesome and solemn responsibility of modeling God’s attributes toward his people in our relationship with our wife.

The Apostle Paul, writing under the inspiration of God states:

“Husbands, love your wives, even as Christ also loved the church, and gave himself for it” – Ephesians 5:25 (KJV)

Not only does Paul tell us as husbands to love our wives as Christ loved the Church, but he follows that statement with the greatest example of Christ’s love for his church, that he “gave himself up for it”.

I would venture to guess that most Christians and even many non-Christians would wholeheartedly embrace this statement of the Apostle Paul. Feminists and egalitarians love this teaching (although they hate the previous statements about submission).

How to did Christ give himself up for his Church?

“Let this mind be in you, which was also in Christ Jesus:  Who, being in the form of God, thought it not robbery to be equal with God:  But made himself of no reputation, and took upon him the form of a servant, and was made in the likeness of men:  And being found in fashion as a man, he humbled himself, and became obedient unto death, even the death of the cross.”

Christ as part of his sacrifice for us confined himself to an earthly body. While he was still fully God and at the same time fully man, he chose not to use all his powers. Christ not only sacrificed himself on the cross, but he also sacrificed himself every day for 33 years by confining himself to mortal human form. Jesus Christ, being the very God who created the universe, humbled himself to the point that he washed his Apostles feet.

Why did Christ give himself up for his Church?

This is a question that many Christians fail to ask, or they will give it a simple answer. Many might answer “He died to pay for our sins” and leave it at that. While it is true that Christ gave himself up for our sins that is not the ONLY reason he gave himself up.

Paul tells us not only that Christ gave himself up for the Church, but he tells us why he did it:

“that he might sanctify and cleanse it with the washing of water by the word, that he might present it to himself a glorious church, not having spot, or wrinkle, or any such thing; but that it should be holy and without blemish.” – Ephesian 5:26-27(KJV)

Christ did not sacrifice himself only to give us eternal life in heaven when we die. He did this also to sanctify his Church, or to make her holy. He washes her and cleanses her through his word.

When Christ died on the cross he gave us positional sanctification – this makes it as though we never sinned when we die and face judgement – God will only see Christ’s righteousness when he looks at us. But that does not mean he wants us to keep sinning in the here and now because he has purchased our salvation. Instead he wants us to fight against our sin nature and live holy and righteous lives even in these sin cursed bodies, something we can only do through submission to his word and his will, and only with the help of his Holy Spirit – this is called progressive sanctification.

A man sacrifices himself when he marries a woman

I had a friend from high school who dated many women but always ended up breaking up with them. Years later when we were in our thirties, I asked him why he had stopped dating, and he said he realized the reason he kept breaking up with all those women was because he did not want to make the sacrifices that marriage demanded.  He had many hobbies and he was on bowling leagues, baseball leagues and enjoyed his job and being with his friends and family. He felt that he would have to give up a lot of that if he were to get married and would have to sacrifice the things he wanted to do for his wife and kids.

While I might not agree with his selfish reasons for not getting married, I appreciated my friend’s honesty. Many men think they can get married and nothing will change, they can continue with all the same activities they did before they were married, but marriage takes time, sacrifice and work.

With marriage we gain companionship but with these blessings comes responsibility and obligation to sacrifice ourselves for our wives.

Here are some real life scenarios where you may be called to sacrifice yourself as a husband:

In this post we discussed the Biblical principle that God wants us as husbands to love our wives as Christ loved the Church and gave himself up for her. He gave himself up not only to pay for the sins of his Church, but also to make her holy and blameless. As husbands, God expects us to emulate Christ’s sacrificial love for his Church in how we love our wives. God expects us as husbands to sacrifice our own needs for the needs of our wife.

Now that we have discussed the Biblical foundation for a husband loving his wife sacrificially as Christ loves his Church, in my next post we will look at principles for Christian husbands to know whether they are sacrificing themselves or their faith for their wife in any given situation.