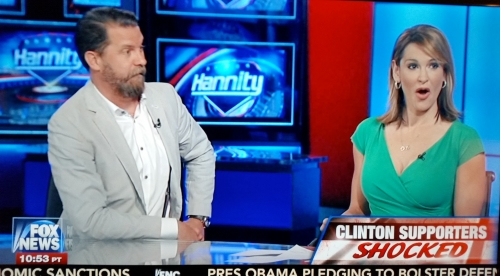 I was working late tonight watching the rerun of Sean Hannity’s show on Fox News when I heard what he thought would have turned out to be an innocent interview about Hillary Clinton turn into something very different. I grabbed my DVR remote and recorded this golden piece of television history.  The interview started out with a discussion about recent reports that Hillary Clinton has paid her female staffers significantly less than her male staffers. Tamara Holder, a regular Fox News contributor who represents left wing feminists, took the position that the reports were false.

Gavin McInnes, the co-founder of Vice Media(and also a regular Fox News guest) stunned Tamara leaving her mouth wide open when he made these statements:

“The big picture here is, women do earn less in America because they choose to,they would rather go to their daughter’s piano recital than stay all night at work, working on a proposal so they end up earning less…They’re less ambitious, and I think this is sort of God’s way, this is nature’s way of saying women should be at home with the kids — they’re happier there.”

Gavin backed up his assertions with a book entitled ““Why Men Earn More” and encouraged Tamara to read it.

Gavin was right – this is “God’s Way”

The Bible states that a woman’s place is in the home, and this was the design of God from the very beginning:

“Teach the young women to be sober, to love their husbands, to love their children, to be discreet, chaste, keepers at home, good, obedient to their own husbands, that the word of God be not blasphemed.” – Titus 2:4-5 (KJV)

God is clear, from the Old Testament to the New Testament, that his intention, his design for women, was for them to keep and manage their homes. This is not some drudgery, it is a privilege from God.  He has beautifully equipped with women with an eye for fashion so that each woman can beautifully decorate her home, in a way most men would not have a clue.

Who is better at taking care of the kids when they are sick, who is the great empathizer? Mom or Dad?

Who do little children cry out for most of the time – Mom or Dad?

Who did God equip with a natural way of feeding infants? Mom or Dad?

This is not just in the God’s Word, it is common sense, the truth stands before us.

I love one of Gavin’s final remarks to Tamara Holder:

The look on her face after he said it was priceless.

All I have to say Gavin is Amen.  Amen brother.

I am curious if Sean Hannity will respond to this or not, he looked like he was trying to stay out of it, but this may catch a fire storm in upcoming days and I truly hope it does.  We really need to examine what feminism has done to this country and our culture, and this was a great discussion about that.

Women are truly happier, when they live according to the how God designed them, instead of daily trying to fight that design.