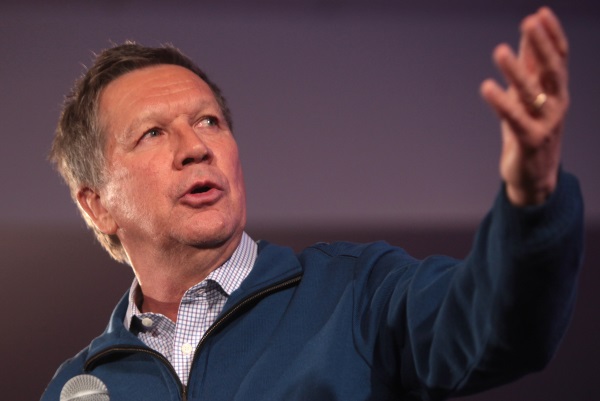 I was watching the Republican debate last night and John Kasich, Governor of Ohio and 2016 Republican candidate for President, made this statement that should send chills down the spine of any believer in religious liberty:

“In regard to same sex marriage I don’t favor it I’ve always favored traditional marriage but look the court has ruled and I’ve moved on and what I have said Hugh is look “where does it end?” if you are in the business of selling things if you are not going to sell to somebody you don’t agree with – today I am not going to sell to somebody whose gay and tomorrow maybe I won’t sell to somebody whose divorced.  If you’re in the business of commerce conduct commerce and if you don’t agree with their lifestyle say a prayer for them when they leave and hope they change their behavior but when it comes to religious institutions they are inviolate in my mind and I would fight those institutions…”

What his answered basically boils down to is – I believe Churches and religious institutions are the only ones who have the right to practice their religious beliefs in their organizations. Business owners do not have that right in John Kasich’s view.

Let me address his gay marriage to divorce comparison.  Some Christians come from denominations that strongly preach against divorce of any kind.  While we may debate this as Christians we must respect those who hold the position that remarriage is never allowed by God even if we may disagree with them.

My divorce attorney and his son have a practice together.  He and his father are Catholic.  His father handled my divorce from my first wife but his son refuses to have anything to do with divorce cases based on his faith.  When his father retires and his son takes over their practice that law practice will no longer take cases of divorce and that is their right to do so.

In the same way a Christian baker, florist, photographer or anyone doing any other business where they would be providing services relating to a gay wedding or any event promoting or honoring the gay lifestyle should NOT be forced to violate their faith by having any participation in these kinds of events.

Mr. Kasich, the Supreme Court may be your final authority for how you live your life but as Bible believing Christians we believe God is our final authority.  While it is true that the Bible tells us to “Submit yourselves to every ordinance of man for the Lord’s sake…” (I Peter 2:13) the Bible also tells us as believers that we “We ought to obey God rather than men.”(Acts 5:29) There is a time for Christians to practice civil disobedience and when the government steps beyond its God given authority and violates God’s law we have a right and obligation to disregard that law which conflicts with God’s higher law.