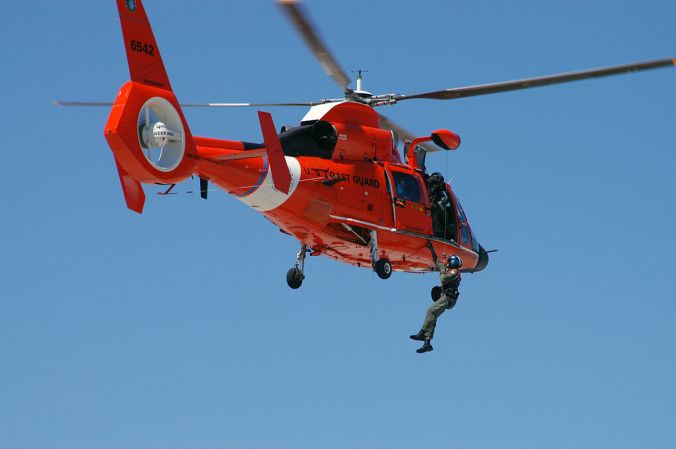 There were three men stranded at sea floating with life preservers.  They were all swimming in what they believed was the direction of land. A coast guard helicopter flies over top of them and offers to pull each of the men up to rescue them. A coast guardsman dropped from the helicopter on a strong cable to rescue the first man and while he was down at water level tells all three men of a terrible storm that is coming and warns them that they would all be killed if they do not accept this rescue.

The first man gladly accepted and the coast guardsman tied his strong harness around the man and pulled him to safety without a problem.

The coast guardsman then lowered himself down to rescue the third man.  He reaches out to him but the third man refused his help.  He said “I can make it on my own.  I don’t need your help. Look it is sunny – I don’t believe any storm is coming.  I will be fine.” The coast guardsman would not force the man to accept rescue and he left him to the fate he knew was coming.

This is the way it is with our eternal salvation. We must recognize the helpless position we are in and the destruction that awaits us. If we refuse to believe as the third man in this story did and we refuse God’s help we will surely perish.

God reaches out to us in love, but he will not force us to accept his salvation. We must freely believe and accept his help. But when we accept his help we must realize that our salvation is 100% dependent on the imputed righteousness of Christ to our account.

“5 But to him that worketh not, but believeth on him that justifieth the ungodly, his faith is counted for righteousness. 6 Even as David also describeth the blessedness of the man, unto whom God imputeth righteousness without works,7 Saying, Blessed are they whose iniquities are forgiven, and whose sins are covered. 8 Blessed is the man to whom the Lord will not impute sin.” – Romans 4:5-8 (KJV)

We should not be like the second man in this story who believed he needed rescue – but insisted that he had to help with his own rescue.  Even though he thought his rescue was dependent on his own strength in cooperation with that coast guardsman – he found out in his moment of weakness that it was truly the coast guardsman that was holding him the whole time.

But thanks, be to God that the chain that holds us up is completely 100% made of the perfect righteousness of Christ and not our own imperfect human righteousness which is as “filthy rags”(Isaiah 64:6) compared to God’s righteousness.  Amen!

God will not impute sin to those who have the imputed righteousness of his son therefore we can NEVER lose our salvation.

Why talk about salvation on a gender roles blog?

Even though this blog primarily deals with gender roles and marriage from a Biblical perspective I do get a lot of emails from folks asking about salvation as well and I think it is good from time to time to speak on the most important doctrine that we must believe – otherwise we will not see God.

Some emails are from people who doubt their salvation because of certain sins they continue to struggle with. Others fear losing their salvation if they question any doctrines that their church teaches.

We can be wrong about baptism, communion, church structure and even Biblical gender roles.  We can believe wrong in a lot of areas.  But we must believe the Gospel to be saved! Only through trusting in Christ can we hope to live the life that God wants us all to live.

But doesn’t the doctrine of justification by faith alone encourage sin by Christians?

Some people believe if we teach the scriptural doctrine of salvation by grace through faith alone in Christ alone that we are saying it is ok for Christians to sin with impunity.  Others believe that fear of losing our salvation will help us to live godly lives.  But the Bible tells us it is not fear that should drive us but rather love for Christ:

“14 For the love of Christ constraineth us; because we thus judge, that if one died for all, then were all dead: 15 And that he died for all, that they which live should not henceforth live unto themselves, but unto him which died for them, and rose again.” 2 Corinthians 5:14-15 (KJV)

We certainly do not believe that a true believer in Christ can live exactly the way he did before his profession of faith. If he saved there will be a change – if there is no change, there is no salvation. The Apostle Paul tells us the mark of a true salvation when he wrote:

“Therefore if any man be in Christ, he is a new creature: old things are passed away; behold, all things are become new.” 2 Corinthians 5:17 (KJV)

I hope that if you have not trusted in Christ today that you will.  Many things I write on this blog about gender roles won’t make sense to you until your trust in Christ and allow him to renew your mind.

But I was really writing this toward some who have recently wrote me emails asking about their eternal security and the relationship of works to salvation.  I hope you will no longer be like the second man in this story who thought he had to help with his own salvation.  Whether you realize it or not you are kept and held by the power of God.

“3 Blessed be the God and Father of our Lord Jesus Christ, which according to his abundant mercy hath begotten us again unto a lively hope by the resurrection of Jesus Christ from the dead, 4 To an inheritance incorruptible, and undefiled, and that fadeth not away, reserved in heaven for you, 5 Who are kept by the power of God through faith unto salvation ready to be revealed in the last time.” 1 Peter 1:3-5 (KJV)

24 thoughts on “Can we lose our salvation?”