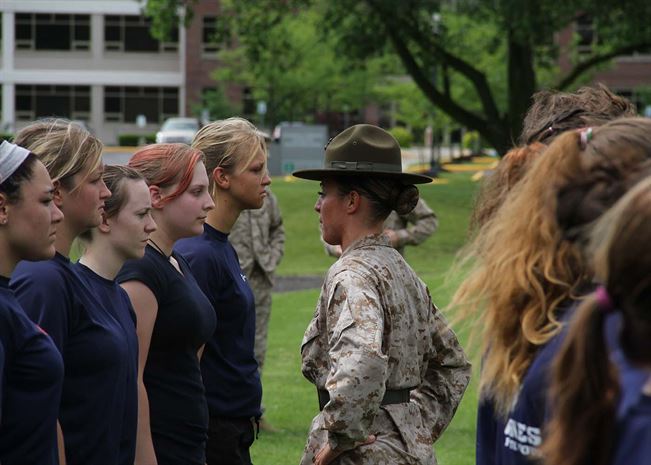 There are some things that are just common sense and this is one of them.

Heather Mac Donald, in her article for the Wall Street Journal entitled “Women Don’t Belong in Combat” wrote a blistering condemnation of this “Obama-era policy”:

“The Obama-era policy of integrating women into ground combat units is a misguided social experiment that threatens military readiness and wastes resources in the service of a political agenda. The next defense secretary should end it.

In September 2015 the Marine Corps released a study comparing the performance of gender-integrated and male-only infantry units in simulated combat. The all-male teams greatly outperformed the integrated teams, whether on shooting, surmounting obstacles or evacuating casualties. Female Marines were injured at more than six times the rate of men during preliminary training—unsurprising, since men’s higher testosterone levels produce stronger bones and muscles. Even the fittest women (which the study participants were) must work at maximal physical capacity when carrying a 100-pound pack or repeatedly loading heavy shells into a cannon

Lowering these physical requirements risks reducing the American military’s lethality. A more serious effect of sex integration has become taboo to mention: the inevitable introduction of eros into combat units. Putting young, hormonally charged men and women into stressful close quarters for extended periods guarantees sexual liaisons, rivalries and breakups, all of which undermine the bonding essential to a unified fighting force.

The argument for putting women into combat roles has always been nonmilitary: Combat experience qualifies soldiers for high-ranking Pentagon jobs. But war isn’t about promoting equality. Its objective is to break the enemy’s will through precise lethal engagement, with the lowest possible loss of American life. The claim that female combat soldiers will perform as lethally as men over an extended deployment entails a denial of biological reality as great as the one underlying the transgender crusade.”

Heather Mac Donald’s is absolutely right that putting women into combat units and pretending that it good for increasing the lethality of  America’s military “entails a denial of biological reality”.

But let’s just remember that modern progressivism is actually a denial of the reality of human nature in general.  Anyone with an ounce of common sense knows that if you take the average 10 men and put them up against the average 10 women in any athletic event the men will win every time.  That is why we have Olympic teams, and professional sports teams segregated by gender.  Now will you get outliers where a woman is as big and muscular as a man? Sure. But exceptions do not negate norms.

And you cannot build something as important as the military around exceptions.  You must build it based on norms.

Heather MacDonald also brings up what she calls the “taboo” subject of sexual affairs happening between male and female military members.  Again, this should be a common sense issue.  When you put a man and woman together, especially in emotionally intense situations bonds will form and those bonds often lead to sexual intimacy.  This is by the design of God and yet progressives want to pretend we can just reprogram human nature and say it isn’t so.

Rob Moll, wrote the following in his article for Focus on the Family entitled “The New Workplace Romance”:

“Today’s workplace has become the No. 1 spot for married individuals to meet affair partners. More men and women are breaking their marriage vows by engaging in office friendships that slowly become romantic relationships — relationships that would have been socially impossible just 30 years ago. As the boundaries that once separated the sexes crumble, so do the boundaries that protect marriage.

In her book Not ‘Just Friends’, Dr. Shirley Glass says, “The new infidelity is between people who unwittingly form deep, passionate connections before realizing that they’ve crossed the line from platonic friendship into romantic love. Eighty-two percent of the 210 unfaithful partners I’ve treated have had an affair with someone who was, at first, ‘just a friend.'” From 1991 to 2000, Glass discovered in her practice that 50 percent of the unfaithful women and about 62 percent of unfaithful men she treated were involved with someone from work. “Today’s workplace has become the new danger zone of romantic attraction and opportunity,” Glass writes.

Today’s careers offer more opportunity for extramarital affairs. Group interaction in coed workplaces, frequent travel and long hours create more opportunity and temptation than ever. Glass writes, “all of these changes and others allow individuals to mix freely where once they were segregated and restricted.” Studies published in the American Sociological Review and the Journal of Marriage and Family show that before 1985, divorce rates were about equal among working and homemaking women; however, “between 1985 and 1992, the annual probability of divorce among employed wives exceeded that for nonemployed wives by 40 percent.””

As any of my regular readers know, I am not a huge fan of Focus on the Family because of how much they pretend to be for the traditional family, yet they utterly gut Biblical gender roles with many things they teach.  But in this instance the author of this article is absolutely right that “As the boundaries that once separated the sexes crumble, so do the boundaries that protect marriage.”

One of the many reasons I have argued against careerism for women is that mixing men and women together in a workplace for 40 to 50 hours a week, especially in fast paced or high stress level environments will inevitably lead to extramarital affairs.  And the stats as Focus on the Family has shown prove that.

The only men that women can be close friends with are close blood relatives or their husbands.  That is, it.  Otherwise you always run the risk of that friendship turning into something it should not.  Yet our progressive friends living in their pretend little world want to deny this basic tenant of human nature even though evidence to contrary surrounds them each and every day.

Whether it be socialism or egalitarianism, the only way these systems survive is on the backs of the capitalist and patriarchal systems they so detest.  The capitalists make all the money for the socialists to spend and the Patriarchal families produce the children for egalitarians to later indoctrinate.

So, at some point when enough of the capitalists and patriarchal families get tired of supporting those who detest their way of life and values and actually band together then these horrible social experiments will finally come to an end.

But until that day of reckoning comes, we as Bible believing Christians need to follow the command God gave to parents in Israel:

Whitney Houston, like Focus on the Family was often wrong in her life’s philosophies.  But she was right in her song that “The Children Are Our Future”.  That is Biblical.  The struggle for the future is a struggle for the hearts and minds of our children and young adults.

Conservative Christian families in America have far more children than secular progressive families do.  We just need do what Deuteronomy 6:6-9 admonishes us as Christian parents do and heavily indoctrinate our children with the Word of God.

We don’t need to shelter our children from the world, but rather we need to expose each and everything they see in the news and around them to the light of the Word of God.  We need to show them why God’s way is right and the world’s way is wrong.

But at the same time, we need to reach out to a generation of young adults whose minds are still moldable.  Many of these young people came from homes where they have never been exposed to the teachings of the Word of God.  We need to share these truths with them and expose the lies of socialism, egalitarianism and secularism humanism.

We can actually use ridiculous notions like this idea of putting women into combat units with men to open up conversations with young people.  We can show them how a Biblical world view that teaches the reality of gender differences and why they exist is far superior to these views that deny the real and stark differences between the genders.