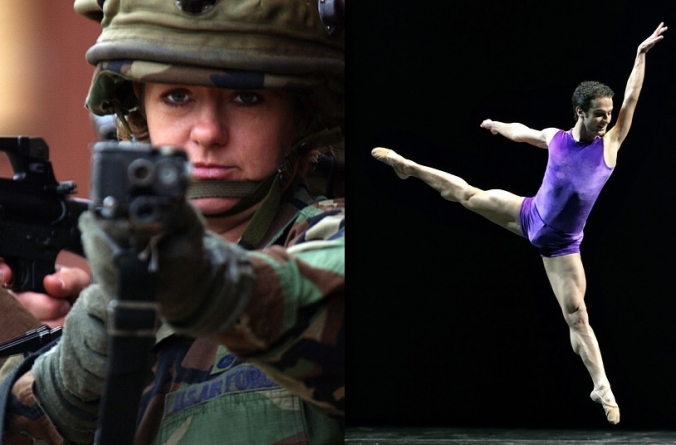 To deny that there are masculine women and feminine men would be like denying there are ever cool days in the summer and warm days in the winter. We do not generally associate coolness with summer, or warmness with winter, but these things happen regardless.

But It would also be a mistake to say there are no such things a masculine and feminine qualities, this is something many feminists and egalitarians are trying to do today. That would be the same as saying that most winter days are not cold and most summers are days are not hot.  Genders do have normal behaviors.

It is a biological lie to deny the existence of masculine and feminine traits.

There are some traits that have been identified with masculinity and femininity since the dawn of civilization.

Masculine and Feminine Clothing– While clothing styles have changed over the last few thousand years, the concept of men and women wearing clothing that would distinguish their gender is as old as creation.

There was a time after Western civilization moved from tunics and robes to pants and dresses that men wore only pants (except for clergy and governing officials’ still wearing robes) and women wore only dresses. In the last century it has become socially acceptable for women to wear pants, but women’s pants are still cut and made different than men’s.

Women actually have a much broader range of acceptable clothing than men in Western culture where they can wear a dress one day, and the next day they can wear pants. It is not generally accepted in Western culture for men to wear dresses or skirts, or women’s pants and shirts. One notable exception to the “no skirts” rule for men would be the Scottish Kilt. But the Scotsmen still get teased about that to this very day.

As far as colors go, women also have a broader range of acceptable colors. While a woman can wear darker colors and softer pastels, men who wear lighter and softer pastel colors are generally perceived as wearing more feminine clothing(especially by other men). The feminist movement over the last 50 years has tried to make it more acceptable for men to wear soft pastel colors in a broader attempt to feminize society.

So with masculinity and femininity defined lets delve into how this impacts masculine women and feminine men.

Degrees of Masculinity and Femininity

The same could be said of a woman, where for the most part she is extremely feminine, but there may be some small part of her that is more masculine (whether it is in behavior or physical attributes). Let me give some examples to illustrate what I am saying:

There are some beautiful and extremely feminine women who are extremely competitive. Maybe they like to play sports, it would be mistake to call that type of woman a masculine woman just because she gets a little competitive on the softball field.

There are some men that look very manly, big muscular and hairy, but the minute they open their mouth you hear a high, soft sounding voice. Just because a man’s voice sounds more feminine, does not make him a feminine man.

A masculine woman is a woman that has several masculine traits, not just some minor masculine issues. For instance maybe a woman is built more like a man. Perhaps she has boxy hips (as opposed to round) and she has big broad shoulders like a man and she is more naturally muscular. At least from a physical perspective, this type of woman would be considered more masculine.

Then there are women who are more masculine in their behavior. Masculine women are generally more aggressive, assertive, competitive and less emotional and empathetic than the average woman.

Masculine women may or may not care about their appearance as a woman. I have worked with many woman in business and I can honestly say I have seen both. I have seen some masculine women, that dress beautifully and in a very feminine way, but the moment they open their mouth and when they get with a group of men they might as well be a man.

Then you have the masculine women who are not only masculine in their behavior, but they even try to dress like men and they don’t care about their looks or try to distinguish themselves cosmetically as a woman.

You will notice I put a picture of female combat soldier on the picture introducing this post. Might this woman be feminine in many ways? Certainly. But I have yet to meet or see a female solider on TV that you would say is a very feminine woman. At best female soldiers are only moderately feminine in their behavior.

I know I put a man dancing on the picture introducing this post, but it was not meant to say all men who can dance are feminine men. I have watched enough dancing shows with my wife to know there are some manly men who dance.  However many male dancers are in fact feminine men, this is just a reality.

Just like with women, there are men that may be more feminine in physical traits like being shorter, smaller, softer and less muscular.

But there are also men that may look very manly from a physical perspective, but behaviorally they are very feminine in that they are cooperative as opposed to competitive, they are more emotional and empathetic and they are generally more passive.

Obviously if a man has physically feminine features or a woman has masculine physical features this is purely genetic (unless they had sex change surgery of course).

Still some men may have been emasculated by their mothers, or had their masculinity ridiculed.

In this first part of this series, I just wanted to lay the ground work for a discussion about this issue. I wanted first and foremost to acknowledge that there are in fact feminine men and masculine women. There are many varying degrees of masculinity and femininity as well.

We also discussed that the sources of feminine behavior in men or masculine behavior in women may be purely genetic or they may be as a result of environmental conditioning.

I know you are asking the question – so what? Our modern world says if a man wants to act (or even dress like a woman) that is perfectly fine. It also tells women if they want to act and dress as men that is fine too. But how does God feel about this? Has he addressed this in his Word?

In the next post in this series I will answer these questions from a Biblical Christian perspective.