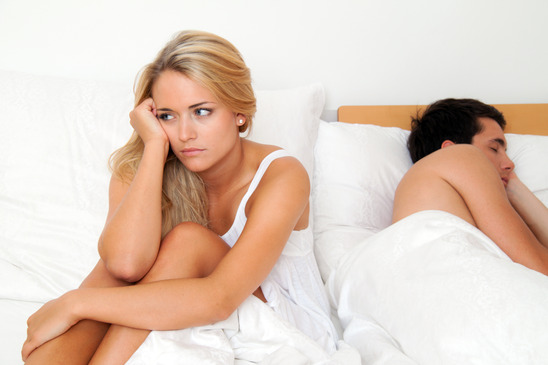 I received a letter today from a woman who married a man she was never attracted to when both he and she were not believers. She said she married him for wrong reasons.   Now she has become a believer and he is still an unbeliever.

She has embraced the Bible’s teachings on the submission of wives to their husbands and wants to serve her husband and see him come to Christ if it is God’s will. But she greatly struggles with her lack of physical attraction to him. In fact she is so un-attracted to him that it makes having sex with him very difficult.

When she was an unbeliever she did not try to meet his sexual needs but now she has changed her behavior and given herself freely to her husband – a man she has absolutely no physical attraction to. She does her best to fake it, sometimes even holding back tears.

He has no idea that she has absolutely no physical attraction to him. In fact he is excited by her renewed interest in having sex with him and is very excited about how their relationship has changed and asking if it was good for her and what he can do better.

She also made it clear she knows God wants her to stay with him for life and she has no intention of leaving him as she once did when she was an unbeliever. But what should she do? This was her question to me. We will just call her “Amanda” even though that is not her real name.

This was the email I sent back to Amanda

Amanda – let me say first and foremost that I am so happy you came to Christ and accepted him as your savior.

I am also so happy that you accepted God’s will and plan for your life that marriage is for life and that God means for you to honor, obey and unconditionally love your husband despite your lack of attraction to him.

Now I will answer your questions with a story.

Well the years went by and that man married a wonderful woman and had his first child and was on his way to Japan as a missionary. Once he was there in Japan the first thing he looked for were restaurants that would sell beef and chicken!   He was so happy to find them.  But as he began his ministry to the people of Japan he found himself constantly being offered various seafood dishes by people who came to his ministries and he would politely turn him down.  A fellow missionary took him aside and told him that his constant turning down of the Japanese food was hindering his ministry and was offensive to many people.

He prayed and ask God to help him to do two things.

“Lord the first thing I am asking you for is to help me cultivate a desire for seafood even though I am disgusted by it so that I can serve your people here in Japan better.   The second thing I am asking for is for you to help me fake that I like it until I actually do.”

Amanda – this applies to you.  The most important mission God has given you is serving your husband.  You may actually be able to help bring him to Christ by continuing to submit to him as you have been doing.  You need to pray that same prayer that missionary to Japan did.  Your lack of attraction and your repulsion to your husband is hindering your ministry to him.  I would suggest you pray this prayer and pray it often:

“Lord the first thing I am asking you for is to help me cultivate a desire and attraction to my husband even though I have no attraction to him so that I can serve this man you have given me to serve and perhaps he will come to you because of my respectful behavior toward him.   The second thing I am asking for is for you to help me fake that I like it until I actually do.”

Amanda – I believe these two passages of Scripture speak to what you need to do with your husband:

“1 Likewise, ye wives, be in subjection to your own husbands; that, if any obey not the word, they also may without the word be won by the conversation of the wives;

2 While they behold your chaste conversation coupled with fear.

3 Whose adorning let it not be that outward adorning of plaiting the hair, and of wearing of gold, or of putting on of apparel;

4 But let it be the hidden man of the heart, in that which is not corruptible, even the ornament of a meek and quiet spirit, which is in the sight of God of great price.

5 For after this manner in the old time the holy women also, who trusted in God, adorned themselves, being in subjection unto their own husbands:

6 Even as Sara obeyed Abraham, calling him lord: whose daughters ye are, as long as ye do well, and are not afraid with any amazement.” – I Peter 3:1-6 (KJV)

“And the woman which hath an husband that believeth not, and if he be pleased to dwell with her, let her not leave him…

I believe many Christian men and women can learn from Amanda’s story and her courage to do what is right despite their feelings.  Some may have married a spouse who they were never attracted to.  Maybe they were attracted at one point and lost their physical attraction over many years.

But I think that we need to do our best to cultivate an attraction toward our spouse – the person we have made a life long commitment to before God. We need to ask God for help in this area.  Maybe we will never be fully attracted to them but God can help us fake it when we need to.

As I have said many times on this site “faking it” whether it be in things our spouses likes to do, attraction to our spouse or even in the bedroom is all part of being an adult. It is part of what it means to be a Christian.  We need to put a smile on and do what God has called us to do even when we don’t feel like it.

Now does this let spouses off the hook who totally let themselves go and don’t have good hygiene? No.  We have an obligation to keep ourselves as clean an attractive as we reasonably can for our spouses.  There are times where we may need to delicately speak about things like excessive weight gain and lack of basic hygiene. But I don’t think God wants us to just tell our spouse there is no physical attraction and there never will be.  There is no way that this would build a relationship and make it better.

If a Kentucky man who loves chicken and hamburgers can learn to enjoy eating octopus in Japan a woman can over time learn to enjoy sex with her husband to whom she currently has no physical attraction.

30 thoughts on “I was never attracted to my husband does God want me to fake it?”